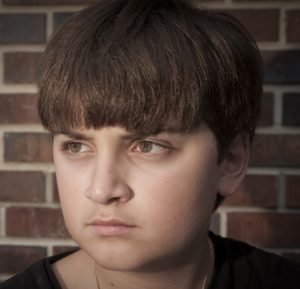 They’d warned us! He was a monster and dangerous, an inmate of mental hospitals for half his life; and those in authority were bringing him to us from a distant state in their last desperate effort to bring about his change before they committed him, permanently they thought, to an insane asylum.

We took the phone off the hook, hung out a DO NOT DISTURB sign, set out our Bibles and readied a tray of protein to ward off hunger; it promised to be a long siege. Now, he was jabbing the front door chime. Authorities had assured us they’d keep us safe, but Matthew had me hang back, just in case.

Of slight build, with spiky tufts of colorless hair flopped over his ill-shapen head, dressed plainly in watery-beige shirt and pants, socks and sneakers, only his fervid look and mean green eyes brought color to his image. His swagger radiated confident defiance; his arched back promised a fight, his clenched jaw led his face into the room where, steeled by defiance, he positioned his bulwark in the corner.

He was short for his age, looking more like five or six than his full eight years; his monster-alter ego well hidden. His father, a sharply-dressed, highly-trained professional, let him be, while his step-mother, in late pregnancy with their first baby, looked very young and beautiful — a lovely mother; except being so terrified, she didn’t really sit, but hovered over the couch cushion, ready to leap and flee.

Matthew and I had ministered inner healing for many years to thousands, so we proceeded with a sequence we’d been led by the Holy Spirit to use before — always listening intently for His voice and direction. For two hours, we sought to crack the boy’s rigid demeanor so he’d let the monster out and we could work with the truth, the reality, of who the boy was. As described by his father and step-mother — the latter with copious tears and barely breathing — we endeavored to see the fiend, to discern the cause and effect of the beast’s violent, uncontrollable rages, the brute‘s cruel, sadistic, unrelenting abuse of his younger brother and sister, his satanic threats to kill all.

He’d been analyzed, mentalized, hypnotized, psychologized; socialized, traumatized, religionized and asylumized . . . and still, he didn’t have his act together.

For hours, the boy stonewalled and the Holy Spirit kept quiet, so we ate in silence, then interviewed him again, seemingly getting nowhere. Heaven, too, had its ears and mouth closed. The parents grew restless — the father, reigning his anger, the mother, raining her blouse with tears; they’d come so far, they didn’t want to commit him, but were out of options. One could sniff the stench of despair.

We prayed; we waited. The Lord had never let us down; He’d always come through. We just had to hold on long enough and stay open till the Spirit moved — we were confident He would.

Four hours spent in prayer and we’d not gained one insight in ministering to this boy. The air throbbed: Impossible case; they’ve tried everything; failure is expected. Evil screamed into the void, tempting us to give up; heckling that for the first time, God stood, arms folded. God would not act in us, nor through us. We commanded evil to leave, beat back hopelessness and despair, battled panic as it sought to suffuse us with nefarious lie.

Finally, it came down to this: Did we believe God was good and would act, now, on behalf of this child and his family — or not?

If only God would overwhelm us with bounteous confidence and victorious faith; how easy it would be! We could do great things! Instead, God asked us to ignore the reality before us, forget all others and look at Him alone. Did we really trust Him? Did we truly believe He would act? Even in face of His absolute silence? Even if He never spoke . . . again?

As day turned to night, our faith stretched out thin as a wispy vapor, yet, we managed to hang on, and on and on. Then . . . could these barely perceived whispers — these four spare words — be from The Spirit? We spoke them to the boy. “You loved your mom.”

His face blanched, his thin chest sucked air; his body froze like an animal held rigid in glare. He’d been caught. Captured. His deep secret exposed, brought to light, given voice. Then . . .

The monster came apart. Now! Manifested before us was the real boy. Seen and felt was the murderous anger that inflamed him, his searing anguish at being violently rejected, his excruciating pain at being cruelly abandoned, the incessant sear of knowing he was long-forgotten, the deep knife-thrusts as he was betrayed again and again by the one he loved most deeply; his self-hate and self-loathing at not being good enough to have her love, his hate for those whose love never assuaged his desire for his “real” mother’s love — all the raging fury that consumed him played out as a conflagration before us. Now . . . God could work.

Long hours later, a bright, happy boy emerged, secure in the knowledge of God’s love and of his parents’ love and forgiveness for him; with no sign he’d ever been other than this lovely child we just wanted to hug. His father turned to us, almost with a sense of awe, and asked, “How’d you do that? We spent hundreds of thousands on the finest psychiatrists and professionals, and they couldn’t touch him, and all you did was speak four words. How do you do that?“

Our answer was simple. “We wait.“

In today’s world, waiting is not good; waiting is waste. Waiting costs. Waiting hurts. Give us Instant! Answers! Now! We, today, refuse to wait.

Never had we felt so deeply engaged by the Holy Spirit to not only wait, but wait with confidence that God does hear; God does care; God will do what’s best. Much more valuable than the miraculous healing of the boy, was God’s demonstration He always holds out mercy to those who seek mercy, in and through Him.

We never cease to see affirmed that God does care, and will care, for His people. Why would we, then, in any crisis or situation that tries, calls for and summons forth the last dearth of faith, turn to anything or anyone, other than God?