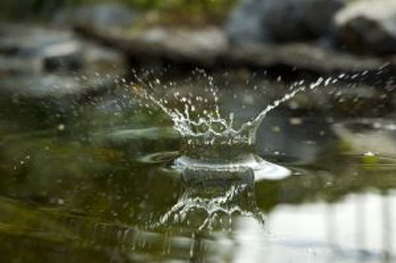 Many years ago, I received a sense from the Lord that He wanted me to perform a major task requiring considerable effort. By way of motivation to obey, He showed me an inner image of a large body of water with concentric ripples that lapped to the shore.

I eagerly accepted His directive. But, as working it out became difficult, I stalled, then balked, then stopped completely. It just wasn’t working. Moreover, I didn’t see how it could possibly be done.

Later, in prayer, the Lord asked me why I hadn’t done what He’d asked. I said, “As hard as I tried, Lord, I just couldn’t make the ripples go out from the center and reach the shore. It’s impossible. So, I quit trying.”

Drop the rock! An important lesson we need remember when asked by God to do something. He initiates. We obey. He carries out. Put another way: He invites. We accept. We “drop the rock” (do the specific thing He asks). Then, because God’s responsible for the working-out and end-result, God causes the ripples to reach the shore in His own way, His own timing. To illustrate, let me share a personal story.

THE BEAUTY AND THE BEAN FARMER

“She’s gorgeous!” I whispered — appropriate because I was in a chapel and the raven-haired, warm-skinned woman was a beauty! She was also furious. Her black eyes sizzzzed like sparklers on the fourth of July.

It was late at night, the end of a 6-day retreat high in the Santa Cruz Mountains, the priest had finished his last presentation and almost all had left the chapel. This young beauty approached him, seemingly asking Father if he’d speak with her. He shook his head, no. I didn’t blame him; he had to be exhausted from counseling 100+ women on retreat all week long.

She bristled at his rejection, and red-faced, stomped down the aisle towards me. The Holy Spirit spoke to me in an inner prompting: Step out. Offer to help.

He augmented the urgency: Step out now! Ask if you can help.

Lord, I argued, it’s midnight. Even as I piled on excuses, I knew I’d eventually give in. I always gave in to the Lord, eventually. So, before she could get by, I stepped out, stopping smack in front of her. She almost knocked me over; then, tried to go around me on both sides. I blocked her moves; all the while, thinking she’s going to hit me.

“What are you doing!” she demanded, face flaming, eyes zipping black darts.

My resolve weakened under her withering glare. “I want to help.” I said.

I blocked her end-run. “Were you here for Father’s last talk?” I asked.

“Well, Father said, in this new outpouring of the Holy Spirit, sometimes the Holy Spirit lets believers know when something’s wrong. God told me to step out in front of you and offer to help — I assume, because you need help. Could we talk?”

I reached her room at three in the morning — not expecting her to answer my knock. We sat on the bed; I talked about God for three hours. All she’d tell me was her first name (Sonnie) and that her husband was a bean farmer. (I envisioned him in overalls, raking weeds between rows, tying string bean tendrils to poles with rag strips.).

Breakfast was at 6:30AM; we broke it off at 6:10 and planned to meet in the dining hall for breakfast. I ran to my room, brushed my hair, smoothed on lipstick, packed my bags.

She didn’t show. And, her room was empty. I searched everywhere, but couldn’t find her. The Director said the woman arrived the evening before; and at 6:15AM that morning, drove off. I asked for her name, address or phone, but it seemed they had a policy of not releasing personal data. They said they’d tell her of my inquiry, if she called.

Did I feel rotten! I’d blown the assignment given me; I’d failed the Lord. I hadn’t helped her at all. It was my fault she ran. I stewed, worried over and prayed for Sonnie. I checked often with the Retreat Office. They still hadn’t heard from her. I battled guilt, kicked myself often, did spiritual warfare . . . prayed still more.

Two months later, the phone rang. They’d driven several hundred miles, were in our city; and her husband wanted to meet us. I was so thankful to see the lovely Sonnie again. Her husband, Laurence, was a delight! Bright handsome face, tall, strong, decked out in Western shirt, Levis and cowboy boots. Full of energy did not begin to describe Laurence.

We sat up all night, all the next day. Hearts caught fire as we witnessed to the Holy Spirit’s move in those open to His presence — and in those most “reluctant”. They’d been away from church for some time; their marriage had “hit bottom” when Sonnie drove by the Retreat House.

“I want to thank you, in person,” Laurence said, “for saving my wife from killing herself.”

He explained, “Sonnie and I had a bad argument, she left home in despair, intending to kill herself. Hoping someone would stop her, she drove to the retreat house; the priest said it was too late to talk. She was leaving to drive off a cliff and commit suicide, when this crazy woman jumped out in front of her and persisted in offering help. Now,” he asked, “what can I do for the two of you to show my appreciation?”

We could think of nothing. But, after three days, they readied to leave and Laurence asked again, “What can I do to show my appreciation?”

I felt prompted to tell Laurence of our two-year search for a fifteen-room house in which to carry out ministry. I said we’d learned in ministering inner healing, that people recovered much more quickly when living in a healing atmosphere. Twenty agents, so far, had given up on finding us “a mansion” on Matthew’s salary — except one dear lady who’d shown us everything big, from horse barns to a concrete fortress with moat.

“Call her up!” Laurence said. “Tell her some farmer who farms 2,700 acres of lima beans in the San Joaquin Valley will make the down payment on your new house; plus, pay half your mortgage payments every month if you need them.”

I didn’t believe him; and I said so.

They waited till Matthew got home from work, and the next day, the four of us went to the bank. They signed papers promising that when the Lord led us to the right house, they’d make our down payment and half the mortgage payments.

The agent, electrified and motivated, found an empty, beautiful, 23-room mansion with 11 bedrooms and 6 bathrooms: over 10,000 sq. feet — not counting an unfinished third floor, a basement the size of a skating rink, a chauffeur’s apartment and a two story, three-bay garage with an underground mechanic’s pit.

We opened Casa del Christo Rey — “the home of Christ the King” — Christmas Eve, 1973. And the influx began.

Sonnie and Laurence bought a herd of cattle to supply our meat; and a van to carry meat and 200 lb. sacks of dried and fresh produce in both routine and surprise visits. The air at Christo Rey pulsed with a special zing when they were in residence. They traveled widely as witnesses to God’s love, mercy and forgiveness, telling the story of this crazy woman who unknowingly co-operated in God’s saving Sonnie from suicide.

Laurence still farms. Sonnie is still beautiful. Both are active in preaching, healing and deliverance ministries, and distribution of free Bibles. We thank God for His mercy and goodness; the plentiful work of His Holy Spirit. Hundreds were counseled, healed and delivered at Casa del Christo Rey; many more were housed, clothed and fed.

OUR ROCKS, HIS RIPPLES

So, what am I saying? That if we say yes to God, big things will happen? No, I’m not.

The importance of one Christian answering God’s one request could be lost in the world of BIG. Whether God’s request is large or small, acclaimed or hidden; or in our eyes, of little, or no, importance — or the carrying out of a grandiose plan — we are bound to obey out of love, to do what the Holy Spirit asks.

Sometimes, those who desire to “do good” for the Lord, are tempted to believe the only valuable ministries are the big ones — performing big miracles; saving big numbers, making the big difference, having the big notoriety. One might seek renown, thinking it proof of value or status; or seek to be “recognized” by those whose nod and approval one sees as “important” or “essential” to their success . . . to be badged, so to speak — the badge being outward proof of one’s importance, acceptability or authenticity.

It’s a human weakness — inherited from our First Parents — that we’d like to be acknowledged and raised up by those we consider important; by those who can “make or break” our ministry.

We know, personally, that these temptations to pride most often come to those of us desiring to do good. They don’t disappear with age, experience, or even, recognition. We’re always tempted to want more and be more; to receive more accolades; to acquire a legacy of the Big Name.

I believe the truth, the reality, is this: God calls us to carry out the works of belief, trust and obedience— to Believe in Him, to Trust Him; to Obey Him when He speaks — these are, most times, the most challenging of all.

God saved Sonnie’s life. God used a weak, failed, often stubborn, human being — just like Sonnie — but one who dared to listen, respond and obey. The initiative was God’s, the responsibility to give grace, God’s; the glory for the outcome, God’s Alone.

We don’t always, or very seldom, need to do the big thing! Most of us are called to simple acts of obedience — acts that may seem trivial, unnecessary, even stupid; without consequence . . . or impossible. Nevertheless, if we discern that God asks these acts of us, we must reject all thoughts to disobey as evil, irrelevant and destructive temptations. The truth is . . . if it’s God’s initiative, God is responsible for the outcome of His work. Our work? To believe, trust and obey.

To quote Oswald Chambers in his inspiring book, MY UTMOST FOR HIS HIGHEST (Dodd, Mead): “When it is a question of God’s Almighty Spirit, never say “I can’t”. Never let the limitation of natural ability come in. If we have received the Holy Spirit, God expects the work of the Holy Spirit to be manifested in us.”

To cooperate with the Holy Spirit and His initiatives, it’s imperative (1) we believe in and acknowledge the Spirit’s presence (2) we pray, learn and listen intently to recognize His voice and work (3) we determine we’ll answer and obey, at whatever cost to us personally, to our name or reputation (4) we will obey, expecting little, none, or negative recognition.

If we drop the rock! listen and obey, we can be the human hands of God’s reach, the human voice of God’s wisdom and inspiration; a human vessel’s expression of His love to His created.

We can never thank God enough for His mercy and forgiveness, His goodness and generosity. Our obedience — in whatever task we’re given — is one good way of expressing our gratitude. Beauties and bean farmers may, or may not, come into our lives. But cooperating with His loving initiatives — dropping the rock! — brings abundant life to our hungry souls.